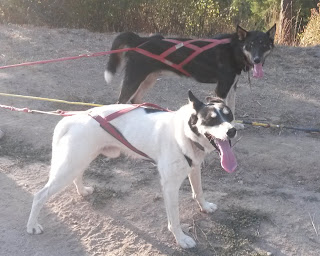 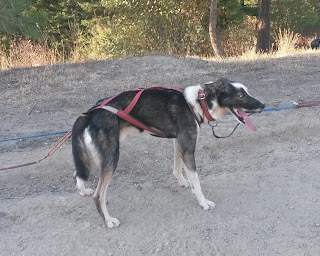 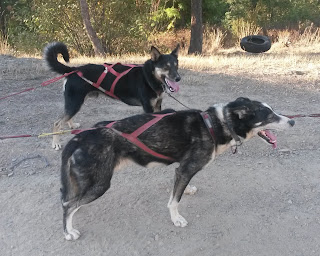 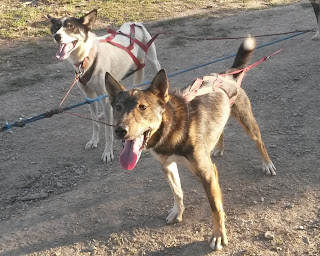 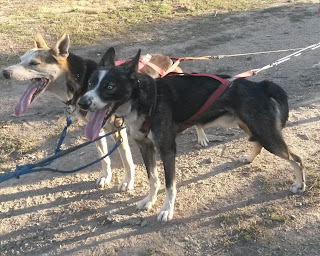 Summer (back) and Eagle (front) 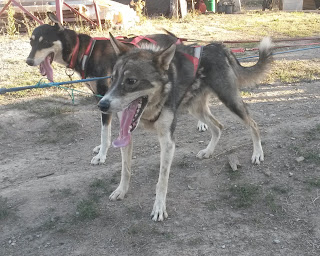 Bea (back) and Razz (front) 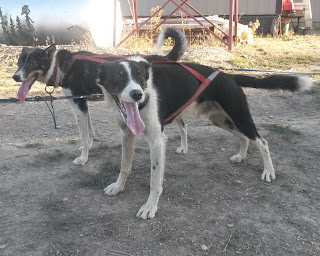 Frost (back) and Rowdy (front) 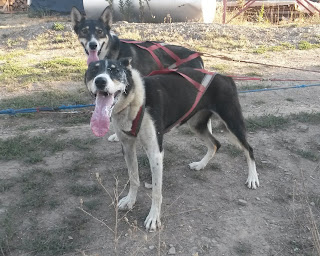 Nestor (back) and Sweetwater (front) 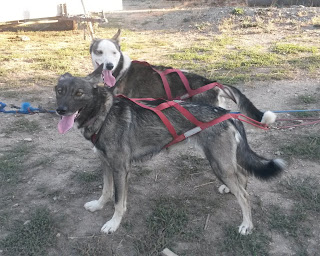 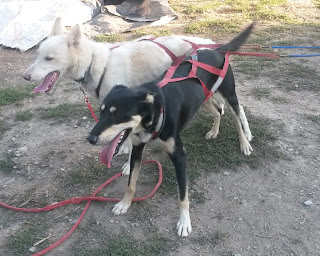 There are so many stories I could tell you about Nakota (the name means ‘my friend’). An extremely shy dog, she also had severe separation anxiety and tried to dig out of my room if I left her alone (that was after she chewed or, rather, tore, open the crate – we went through several).
Before I got Nakota I had seen the local fair book which said there was a 4-H Dog project. I was intrigued and wanted to do it. Nakota was a great project dog, with her shyness she was a challenge and taught me perseverance. Come to think of it, though, I don't recall any regrets or ever thinking she was "incurable". Perhaps that’s why I enjoy taking on project dogs and turning them into lead dogs…with that said, it’s much easier to start with a well brought up dog. I wouldn't train my super-friendly puppies for anything!
We brought Nakota home in the fall and over the winter my mom and I took a dog training class with a German Shepherd trainer named Kat. I will always have a special place in my heart for her. She taught me so much more than how to train a dog: she trained me! She taught us about feeding and dog psychology. She drilled the importance of body language into my head. To this day there are things I do naturally to communicate with my dogs which have become subconscious...sometimes I accidentally treat people like dogs. To stress the importance of body language, Kat would say that the dogs feel everything through the leash – I now know the dog team can feel everything through the gangline. I've not seen her for years, but if or when I run into her again all I can say is: THANK YOU!
Perhaps one of the most important lessons I learned from Nakota is not to care so much about what people think. With such a shy dog, you were never the “cool” kid at dog training…rather than the prim, well mannered Aussies who seemed to do everything perfect (in my perspective), she would try to bolt when the lady with big hair (to Nakota it was frightening when it blew in the wind) came to do an examination for fitting and showing.
I don't know how many obedience stays she broke...but I learned to focus 100% on her, rather than those around me. It didn’t matter how ridiculous I looked when I was praising her or that I had to modify most training methods to be extremely gentle. I can’t thank the 4-H leaders, Vicki and her daughter Sarah and everyone else for being so supportive and putting up with the little girl and her nervous husky (the only husky in the 4-H training class at the time, or since that I know of).
And, more importantly, through 4-H that I began to learn about dog sledding through the "new" adventure project: Dogsledding. I’d already started reading about mushing, but the project jump-started my interest. We visited kennels and went to the sled dog races to watch. My older brother did the project and he built me a sled with my Grandpa’s help (the first one - it was glued together and scarcely safe for 1 dog...but fueled my passion nonetheless). We trained Sable and Nakota to pull us on rollerblades on the bike paths in town.
After about two years, I decided I really wanted to do this dog sledding thing or get into showing. I wanted to get another dog and, as many dog owners, thought about breeding Nakota. With that idea, I consulted with a show kennel who also happened to do little mushing. What a visit!
We saw their dogs and talked for a long time. The result was that the older man told me if he was to do it over again he would race sled dogs and not do showing. He did not discourage me from breeding Nakota, but told me to get her checked out for good hips and eyes first. I came away with a shaken desire to show dogs and still a desire to run dogs. I think I forgot to mention, Nakota had a split ear from a puppy-hood fight so was not able to be shown…I’d have had to get a new dog to do confirmation showing.
My studies of mushing taught me about the different breeds of dogs, but I had no desire to run the crazy Alaskan Huskies (funny how things change, huh?!!). One musher told me bluntly that you could never be competitive with Sib’s. I later learned he had been beaten many times by purebred Siberian teams. I got off the phone crying and told my mom that if show Siberian’s couldn’t race well that I would find dogs that went back to Leonard Seppala’s original dogs. There had to be a working husky line out there that wasn’t just a pretty show dog.
I took Nakota in to get her OFA (eye) check and on the way out ran into a lady holding a cute Siberian puppy. We got talking and she told me it was a Seppala line Siberian – a dog with easily traceable lines back to Leonard Seppala’s dogs and they raced them. Exactly the dog I was searching for! 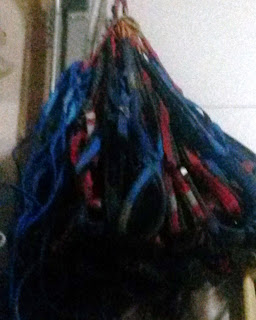 As I gear up for the Iditarod, I keep an eye on Sled Dog Central for any equipment sales and, I admit it, dog sales. I've not bought any dogs from anyone but Scott - and only dogs I've run - since Alaska...until this year, when I got a yearling from Kirk Barnum named Saxon. But I only went down to get gear...oh, those famous words! 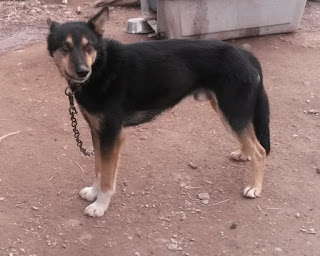 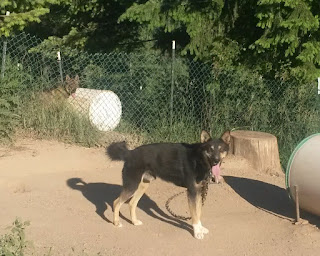 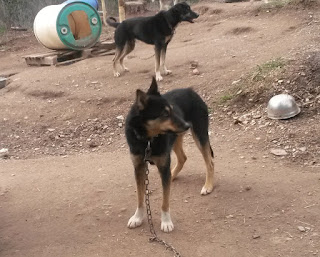 One of the things I miss most about Alaska is all the mushers. My friend Hannah and I talk often and it's nice to have a fellow musher nearby - but the atmosphere of mushing talk and stories from Iditarod musher's is hard to beat. That's why races are often like a family get-together...swapping training and race stories and talking dogs with people who know what you're saying when you mention things like "snub-line" and "swing dog." I should note that my family is extremely kind to listen to my ramblings; I thank God for such support!

I'd met Kirk many years ago at a Seppala (siberian husky) sled dog club meeting in Montana - when he was doing the Iditarod. I knew he'd sent some good dogs the way of my friend Aiyana but hadn't really seen him since the 2012 Iditarod when he was parked across the street (it was SO good to see him and Aiyana and her dad - people I actually knew from home after 6 months in the Alaska wilderness!).
So when I heard he was selling out and only 4 hours away, why not drive down and see what gear I could buy that's Iditarod tested? And when Hannah offered to come with me: it's like a musher's vacation!
I went down in April and although I meant to only come back with snowshoes, sleeping bag and other mandatory and needed gear, I ended up with a sled and lots of gear...and several dogs. I was originally going to take 12 dogs, but Hannah helped convince me to only take seven. The deal was that I would harness break the young dogs and then could keep the two Iditarod veterans...if I wanted them. This satisfied the requirement I've set on dogs of never purchasing a dog I'd not run first. The dogs were three females: Pabst, Hermit and Amy and four males: Saxon, Ludwig, Wizard and Schmidt.

A few of the dogs: 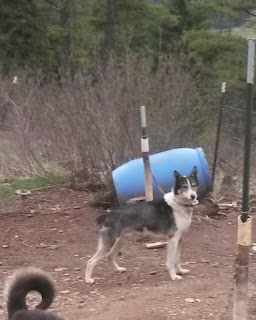 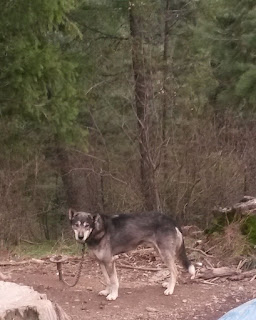 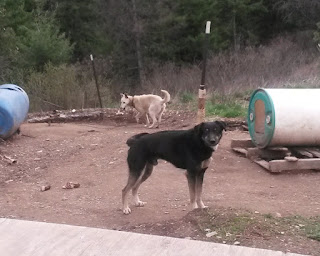 It's not often that you can take another musher's dogs and run them...and get to see what they're made of. It was a great experience. The first thing I realized is that although his dogs are a slightly different style from mine (they move their feet a bit different), they moved fluidly and got along well...there was consistency. I also felt encouraged because his dogs are about the same size as mine. I've always been back and forth about size, but as Kirk said, the ideal size seems to be changing all the time. Top notch mushers who used to be known for small dogs now have big ones, etc.
The second trip to Kirk's was in May to take the dogs back. I decided to keep Saxon only. It was a hard decision, but I hadn't planned on getting any dogs and he just stuck out. I decided I didn't want any older dogs at the moment because I'd bred the 3 litters which I'd hoped would provide a large crop of pups.
The third trip was to get some more gear, including lines. On this trip we talked a great deal about breeding dogs and bloodlines. He said that he looks at the female line in a dog more than the males in the pedigree - which is apparently what the Streeper's have been doing. I think there is some truth there, because when I look at all the pups from Mouse or even the female line from Summer's background to Summer to Moondrop (who's becoming a gorgeous pup) it seems to make sense. I'll be watching it for a while and see if it's true. This is not to say that the male is not important, just that the female is more important. Looking at some of his bloodlines I was pleased to see Summer has some extremely good dogs in her background...
Upon coming home I've been using Kirk's lines and have "fallen in love" with the small snaps for both tugs and necklines and the 19" necklines, made of very small rope. I've been training 18 and 19 dog teams this fall as I try to sort through the dogs to get to the race string and it makes the tight corners on our trail difficult. Thankfully, I'm using Kirk's system. Not only will the snaps break, as a last resort, but the light necklines snap easily if the dog gets dragged into the corner or goes around the wrong side of the tree/bushes. The safety advantages, especially as I'm running Rowdy's pups who are still learning the ropes (literally!), are tremendous. Of course, it's also strange to be using 8ft gangline sections - I've run 7 and 6 ft sections for so long the 20 dog gangline seems overly long...but it's not.
There's so much more I learned from Kirk, but I'm sure it'll come out in future posts...happy training!