This morning I did what is likely to be my final run in Alaska. I ran a team of 14 - with the nine pups who now have 100 miles of training on them in 26 runs. They are an amazing group and I hope I get to see them again, once they're all grown up and running the Iditarod or Yukon Quest! 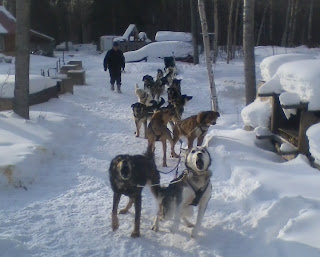 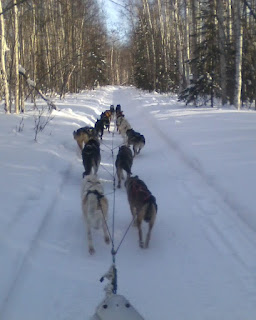 Three miles into the run.﻿
Posted by Josi at 5:16 PM No comments:

Life is full of ups and downs, but the last six months have been a roller coaster ride! Perhaps it's because this is the first time I've been away from my family for so long, maybe it's just because dog mushing is full of unexpected challenges and rewards. Either way, I've learned a ton about myself, made mistakes and sought to repair them with God's help.

After the Iditarod start, I had three more training runs before my race - the Two Rivers 200/Chatanika Challenge. Scott and I got drop bags done and I trudged through the training runs with my team - who were obviously as bored of the trail as I was. I was looking forward to getting on some new trails and experiencing the Alaskan sled dog racing atmosphere...everything was set and going great.
And then came the hammer blow! The morning we were going to leave for the race, I checked my e-mails to find out that the race was postponed for a week. We'll just say I was a bit distraught. All I'd trained for all winter, the reward for handling, gone in a moment...because my flight home was scheduled for March 17th.
I looked into re-scheduling my flight, but airfare prices were ridiculous - probably because of all the Iditarod traffic - and with a heavy heart, I realized I'd have to forgoe the race. I'm pretty resigned to it now, especially as I look forward to returning to Idaho - I did enjoy training and working with the dogs here and I'd never put 1,800 miles on my team in one season before.

But the saga doesn't stop there. Leila, who qualified for the Yukon Quest this year, was still in Alaska and will be taking the yearlings in the race this weekend in my stead. I'm very glad they will get to see a new trail and so excited to watch Leila run because while I can go home and run dogs whenever I want to (all summer on the 4-wheeler, if the weather allows!) she only has these winter months to gain experience and spend hours on the back of a dogsled. It's a new trail, a new team and should be a great time...I'll be waiting eagerly to hear how it went and see how the yearlings do.

So, my last week has been spent helping Leila get ready as well as packing up for the trip home. It's going to be a crazy weekend - my flight is Saturday morning but I may get to the airport extremely early (try, 3am) so that Scott can get to the second checkpoint for the Two Rivers race - this isn't really a handler assisted race, but the handlers have to clean up after their team and deliver drop bags to their team. We'll see how it goes, one thing is for certain: I probably won't be that rested when I get home!
Posted by Josi at 1:34 PM No comments:

The trip down to Anchorage was beautiful and we made good time. We met Aaron in Eagle and headed to a quiet hotel in downtown Anchorage for the night.
All the dogs ate well and then I went with Aaron to meet Nancy Yoshida - whom I'd never met but was the person who directed me to the Burmeister's in the first place. We had fun talking over dinner and then we went back to the hotel with nothing to do until dropping the dogs in a couple hours. Nancy was up in Alaska to work with communications along the Iditarod trail...something she's done for a couple years I believe.
For the next couple hours, I got some studying done (for Insurance) and then went to bed, going to get up early and grab breakfast before dropping the dogs at 7am. Now, I've often teased Scott over the course of the winter about being late to morning feeding...while I've usually been on time. So, I wasn't too concerned about getting up on time.
As my plan went, my alarm went off at it's normal time but, not wanting to disturb anyone who was still sleeping, I figured I'd just lay in bed for a bit longer. Bad idea! I fell asleep and woke up at 7am to Aaron knocking on the door...
I think everyone got a laugh out of it, but I felt bad since this was when Aaron should be able to rely on his handlers. Fortunately, he wasn't stressed out or worried about it at all.

We dropped dogs and got into our parking spot in downtown Anchorage by 8am. It was cool to see all the dog trucks for famous musher's like Martin Buser (just up the street two trucks) or Aliy Zirkle (behind us two trucks). And it was nice to see some familiar faces as well, like Jake Berkowitz (whom I'd met at the Quest start) and also Aiyana Ferraro, who came up from Montana to run the Jr Iditarod this year. Loved her Continental Kennel Club hat - I had mine with me and the thought crossed my mind to get a picture together under the Iditarod sign or something but pretty soon I was busy getting our team ready for the ceremonial start. Still, it was good to catch up with Aiyana and her dad, as well as getting to see some of Kirk Barnum's dogs - an Iditarod musher from Idaho.
In the ceremonial start, you weave through Anchorage on the Fur Rondy (a big sprint race the weekend before the Iditarod) trails, through the woods and down an airstrip to a parking lot where the dog trucks are. It's 11 miles and the teams are limited to 12 dogs, with a second sled and Iditarider. Of those 12 dogs, you don't necessarily have to use twelve of the dogs you'll be racing. For example, we ran Vasser in lead and Mouse in wheel for the ceremonial start, but neither of them went on to race.
We bootied all the dogs to protect their feet on the soft, slow trail (snow was hauled in to cover the streets) and had a lot of handlers to help control the dogs to the start because we had no hookdown or breaking power on the soft snow. Sebastian Schnuelle stopped by to see his dogs and take pictures/video coverage of Aaron's team. He rode for a little while in my sled as we started, and then headed back to the start line.
It was snowing and fairly cold, but the trail was slow and the dogs settled down quickly. People lined the trail all through Anchorage and even out in the woods. We were passed water, muffins and cookies and offered hot dogs at different stations.
All the little kids held out their hands to get a high-five and, when Aaron couldn't get to them, I usually did. I don't think I missed many! It was a lot of fun.

After the run, we loaded the dogs in the truck and ate lunch before heading back to Willow to stay with friends of Aaron's who live on Willow Lake, where the restart takes place. We were able to park the dog truck in it's assigned place on the lake (the parking for dog trucks is on the ice!) and walk or snowmobile back and forth.
We were treated to a great dinner and breakfast. I was up early for feeding the dogs in the morning, leaving Aaron to sleep in.
Aaron's start time was about 3:30pm, so we had a lot of down time. I walked around and wished some of my favorite teams a good, safe run to Nome and looked at different set-ups and dogs. I met several mushers, including Martin Buser and Tom Thurston.

And then, all at once, the action started. Teams began to hook-up and it got very noisy. I think Aaron was finally a little nervous right before the start, but we had no problems getting up to the line - thanks to John Baker's great team of handler's coming to help us - and Aaron took off down the trail.
And that was that. I returned to the now empty dog truck (except for Tango, Mouse and Vasser) and then Mandy and I headed back to Nenana. I'll cover what's happened since then in another post.

Of course, we all watched the Iditarod closely - wondering how the team looked. It was great to see how strong Aaron's team was, keeping 16 dogs in the team for so long. For the beginning of the race he stayed on his schedule and hung in there with the leaders. But at some point, to stay in front, you've got to make some moves based on how the dogs are looking and it's always a bit of a gamble. It seemed to work out pretty well for Aaron, since he placed 4th - the best placement he's achieved thus far in his Iditarod career.
The dogs that got dropped were:
- Todd: I believe he was just tired.
- Saffron: Just not fast enough, having trouble keeping up.
- Porter: Ate some booties and stopped eating.
- Clyde: Slipped on the ice and was limping as they came into a checkpoint. Was fine at the checkpoint but Aaron opted to drop him.
The last two were dropped close to the end:
- Blaze: Mentally tired.
- Bonnie: Mentally tired.

And that's about it...the dogs are coming back to the kennel tonight. It will be interesting to see them - how do dogs look after completing a 950 mile race? What will they act like? I'm very glad that the race went well and according to plan for Aaron - this year some competitive teams scratched and one couldn't help wondering who might be next due to unforseen circumstances!
With that said, congratulations to everyone who finished - having witnessed the huge commitment it takes to put a team in the Iditarod, I can appreciate what has been accomplished.
Posted by Josi at 8:03 AM No comments:

A lot has happened since my last post...but at last here are some pictures of the drive to Anchorage! I didn't get any pictures of the Iditarod start or re-start in Willow - being busy handling - but you can find lots of pictures on the Iditarod website (you can also follow the race and Aaron's team there as well!).


The Drive to Anchorage﻿ 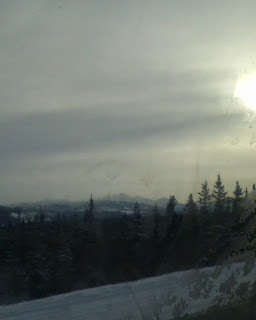 Are those actual mountains? 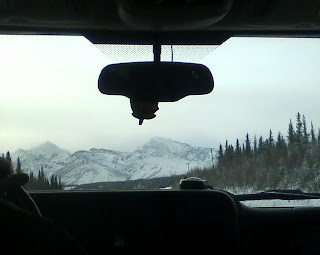 Yes, they are! At last, some mountains! 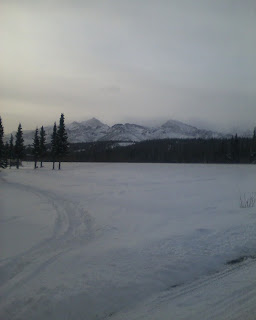 Part of the Alaska Range 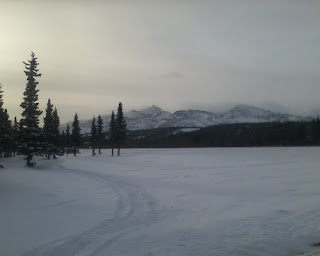 View of the Alaska Range from Healy, AK 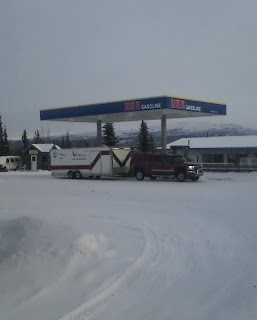 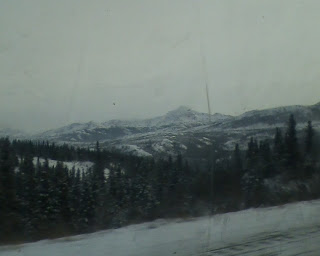 It was sooooo nice to see some mountains, after a winter inthe Nenana swamps! 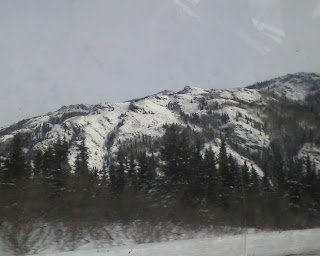 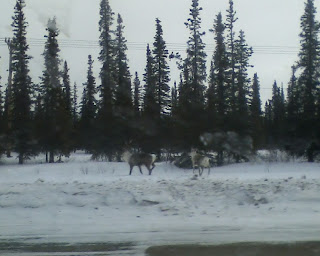 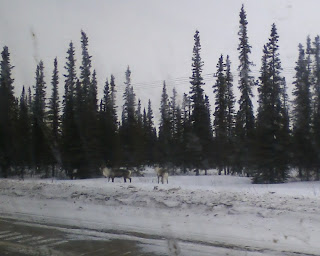 These are the only animals I saw on the trip - two Caribou. 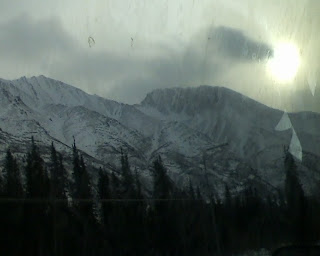 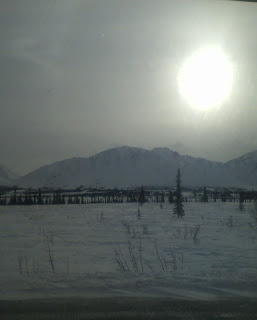 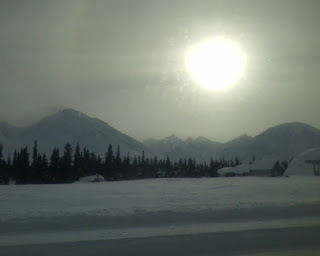 More of the Talkeetna Mountains.
The Drive Back to Nenana: 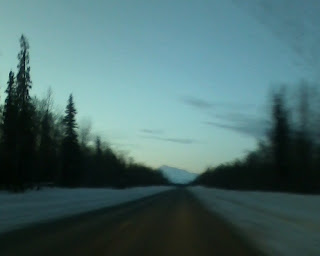 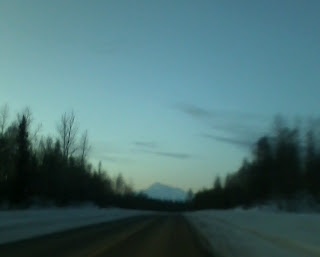 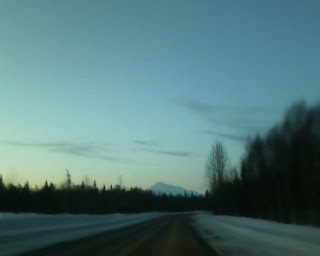 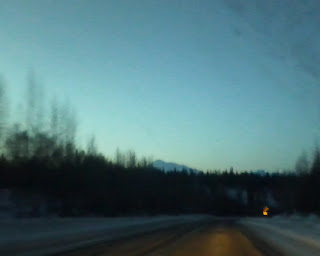