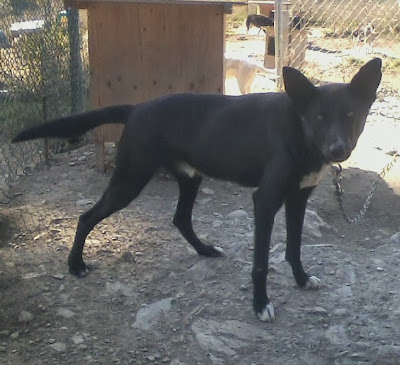 "Biscott" - another yearling and the biggest of them all. Smooth and always trotting, he's making his way to the front of the team. A calm and friendly boy in the yard, he keeps weight well and is always excited to go! As a puppy he had a big problem chewing necklines, but I'm hoping he's grown out of that... 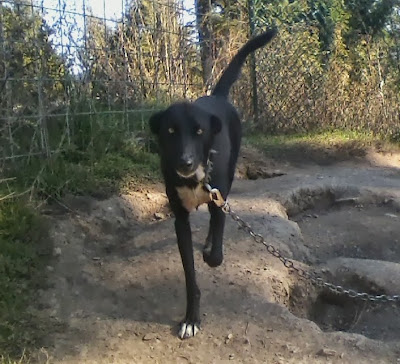 Mocha is another yearling who seems to always be on a caffeine high - dogs really do live up to their names! Nicknamed "wild eyes", he always wants to go. He feeds of the older dogs and as a pup he was already leading by the second run! As the fall progresses and he gets more comfortable, he's run more up front and truly prefers to be up there than in the back. Will be looking forward to seeing him race - will he be a second Legolas? Only time will tell...

Here's some snapshots of the team in training:
(From my phone, so sorry about the poor quality!) 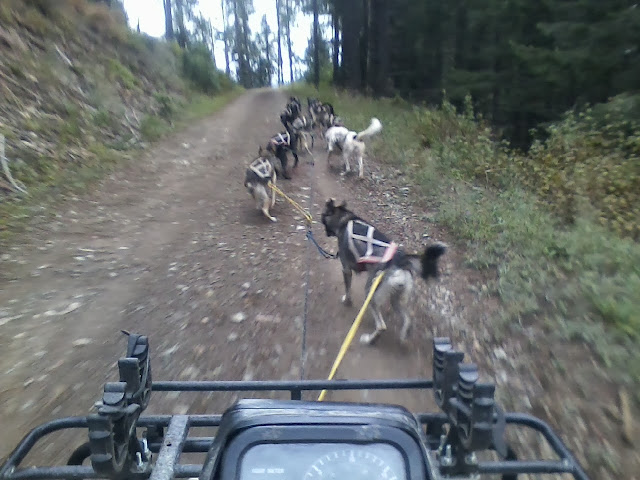 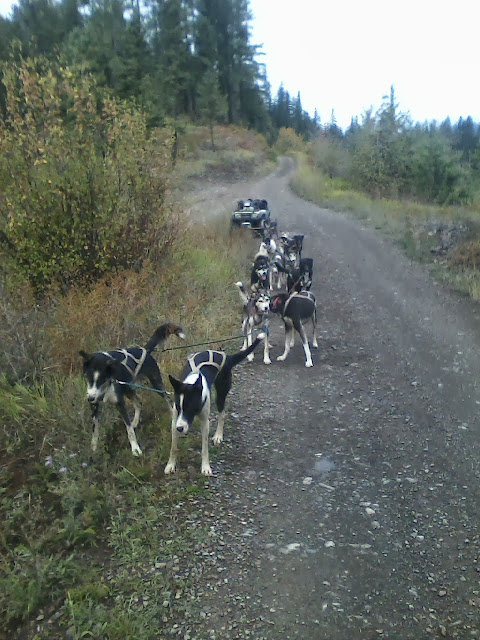 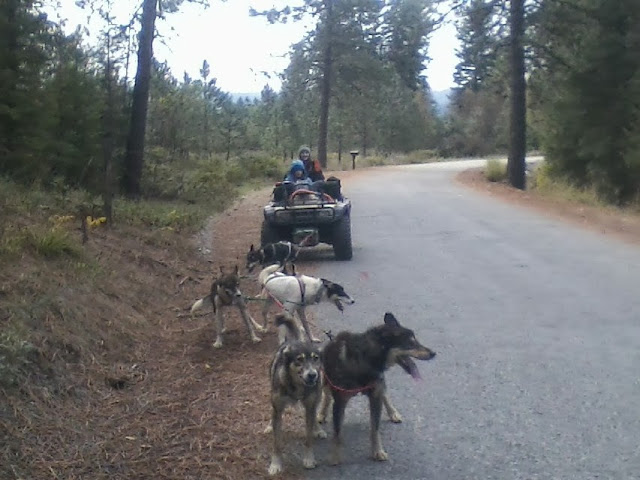 The official puppy training squad - kids and sleddogs; what could be better??? 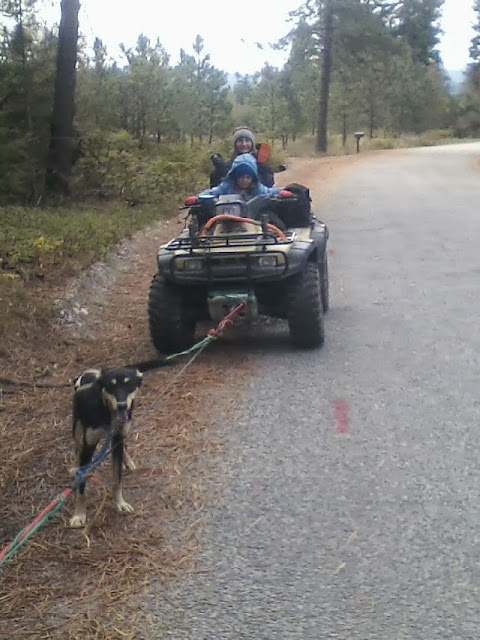 No, Jingle doesn't have to do it all himself!
﻿ 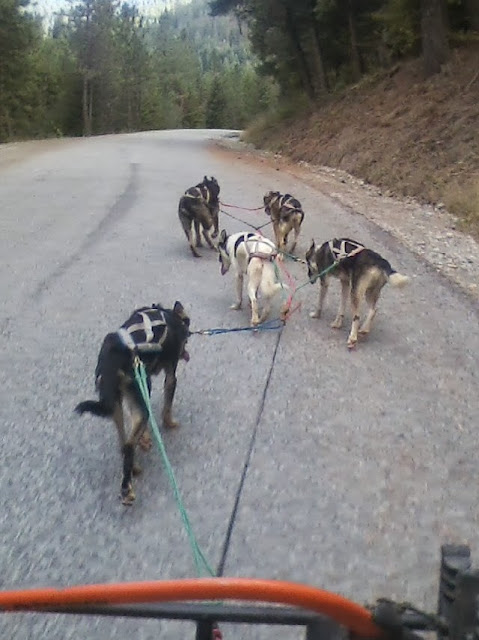 
And the beautiful white horse that greets us when we run by: 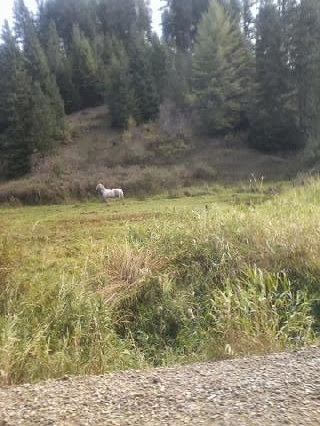 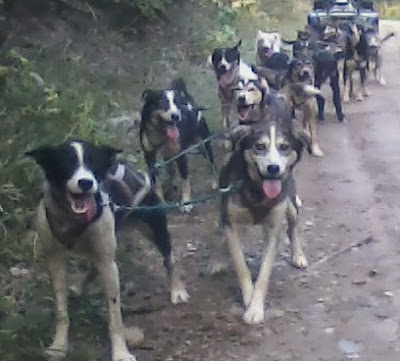 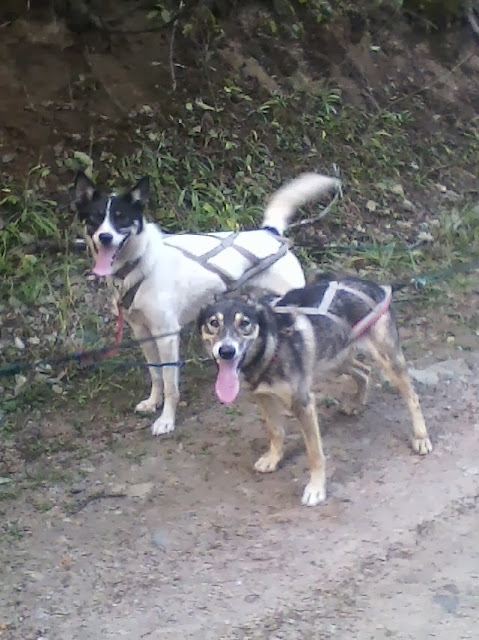 Mouse (brown) and her daughter Belle. 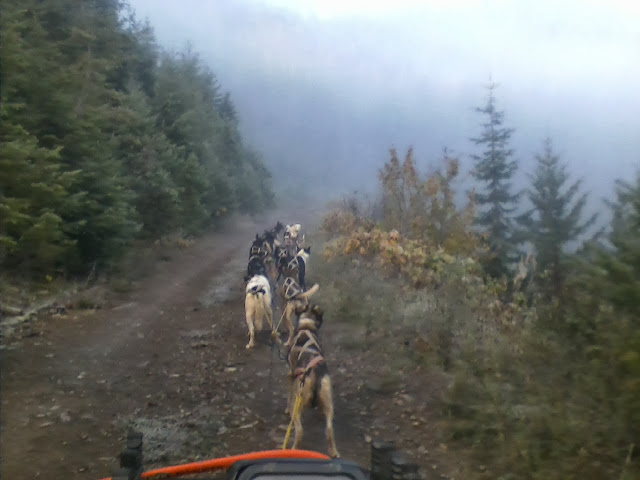 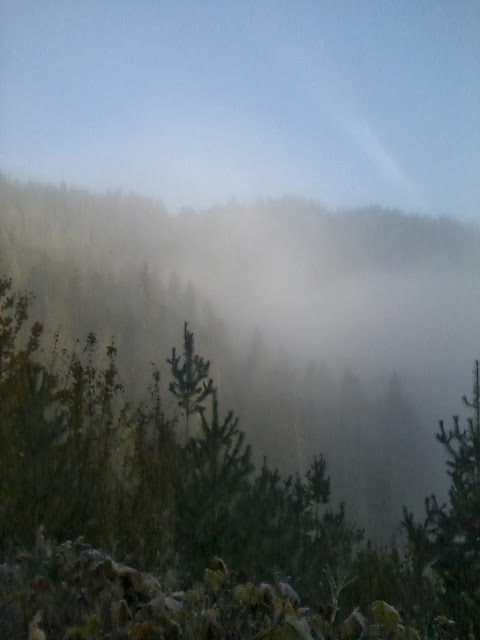 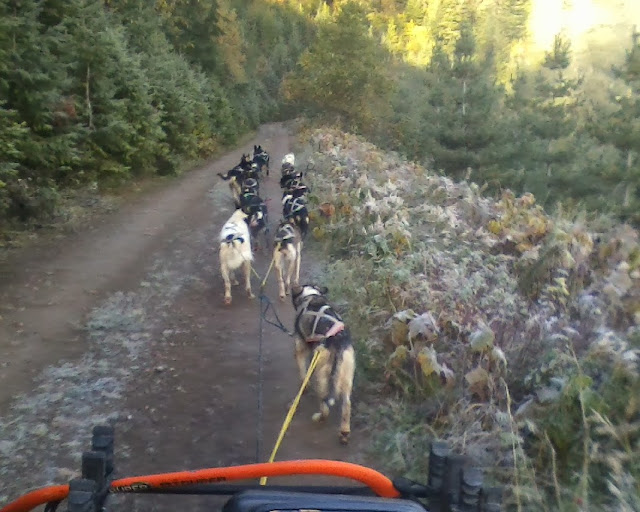 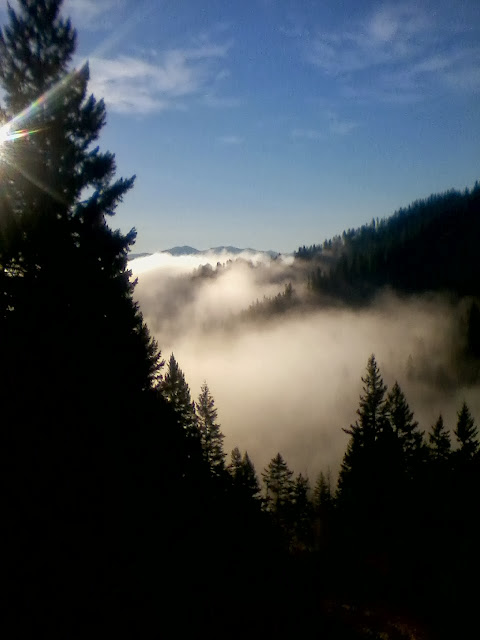 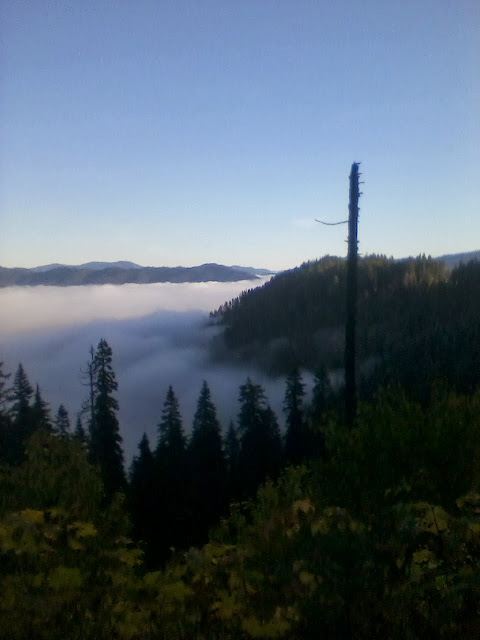 While we are on the subject of teamwork and teams...
Every musher has sponsors. They may give money or they may give time...but we couldn't do it without them. I was asked on a sponsorship application to outline my training philosophy and goals and thought I'd share the result:


Greetings! Fall training has begun and this year we’ll continue to move forward towards the goal of finishing our Iditarod/Yukon Quest qualifiers. Like any large project, the goal – the Iditarod – can seem very far away but like any distance race, my team and I take it one mile at a time.
It all started out when I was ten – for several years I ran Seppala Siberian sled dogs before I was won over to distance racing. The dream that was kindled when I got my first little Siberian came back full force and led me to entrust the remnants of my team to my family for a winter while I handled in for Aaron Burmeister's Iditarod kennel. It was there that I learned how to really train a sled dog team.
Last year, with a team of veterans, we completed two Iditarod qualifying races. The highlight of the season was being honored with the Best Cared for Team at the Eagle Cap Extreme. I say “we” because it takes a team to get to the finish line; I could never do it without the support of my family, sponsors and mentors…or the amazing athletes that show me time and again that I’m the weakest link.
With this in mind, my philosophy has continued to develop as I look towards the coming year – filled with a new set of challenges. I love working with yearlings; they are enthusiastic and as they learn, it’s hard to get upset with them because they try so hard to be “big dogs”. But it means a slightly different approach to training. Rather than maintaining the trust built over years, a new bond must be formed with each of the young dogs. And then there’s the heart-wrenching decision of which yearlings will race and which will need that extra year to mature…but that’s hundreds of miles down the trail at this point.
Last summer when a friend entrusted me with the litter of pups that are this years yearlings – I promised myself that these would be trained right. They would learn that there is no limit to what they can do and that I’ll never ask more than they are capable of giving. With such high-energy attitudes and drive as they show, it’ll be my responsibility to manage it.
It’s not really a new philosophy, just a different angle. I’ve fully embraced the training principles I saw implemented in by Scott Smith. Fall is a time of building strength – not speed. It takes patience to go 7-8 mph while so many lower 48 sprint teams are going 10-12 mph, but the fact is that I’m actually building speed into the dogs for the end of the race.
Training is about so much more than miles. I’ve come to a new appreciation of this because this year I completed a ½ marathon – it helps me understand a fraction of what sled dogs go through in a long distance race.
With that said, my goal every year is to get 1,000 miles on the team by January 1st. To get there, it means we’ll have to do many 6-7 hour runs and when the dogs can handle the time (not so much the distance – because it will come) they’ll be ready for some camping runs.
Last year, with veterans, I could focus on long distance runs and didn’t need to do more than two camping runs because they knew to rest and checkpoint routine. With yearlings it’s the opposite. Rather than pushing them to the mental edge for a long march, yearlings need to realize that they can stop and go – and that we’ll stop again. Next year they will be mature enough for those long marches.
For the yearlings the entire season will be about instilling good habits. Eating, tight lines and no chewing are a few principles I require in the team. When the dogs are happy and confident, there’s little fighting. In a long run it’s important for the dogs to be able to run with anybody and get along comfortably. I also train them to be patient and under control – they have to respect that we don’t go until I give the command; if we need to stop suddenly, turn around or change course at a moments notice, they have to trust me to keep us safe out there.
And then there’s the other side of training – the diet. Because of the abundance of beef in my area, I typically feed meat heavily. However, due to the warmth in the lower 48, it can spoil in drop bags and this year I plan on mixing in a bit more kibble and including some meat mixes that will increase palatability. In distance racing you want options and last year a single type of kibble and meat was not adequate for optimum performance.
New this year, I’ll also be training three Alaskan Husky puppies that have been born at my kennel. I’ve not had pups in the yard (that were born here) in three years and to see them already getting comfortable on their short runs is rewarding. They are the future and although they are just a few months too young to make the race string with the yearlings, next year they’ll be ready to go.
As I watch the team mature and look back at where it all started – a ten year old girl and her little Siberian Husky – I realize I could never do this alone and I’m thankful to all who have given their support. It’s been a pleasure to meet and work with so many wonderful people brought together by the common love of dogs…and I look forward to working with my sponsors this upcoming season as we blaze new trails together.
Posted by Josi at 12:39 PM No comments:

It Takes A Team

At last the hot weather seems to have gone away and training has begun in earnest! This year is the first time I've ever had two teams to train and also the first time I've had more than enough dogs for the race team.
In Alaska I learned you really don't need a lot of extra dogs - train them right and you should be able to get them through. I was very comfortable with my little 9-dog team. All that is changing!
First, I have yearlings - which means I've got to be careful to make sure they can succeed and build a strong foundation for the future. I want them to trust me and know that I'll take care of them out there.
Second, with more than 12 dogs I'm not always running the dogs together. This means someone often gets left...and it's interesting to see how this affects my core (the adults).

Last year I remember leaving both Jersey and Summer at different times in the season because of sore wrists...and I recall how interesting it was that without their calm (or crazy!) influence, the boys just weren't themselves. But add them back in and now we were motoring up the hills rather than messing around.

This fall I was reminded, again, that it takes the whole team to have a good run. Due to a yearling induced team tangle at our turn around, my leader Legolas was sore and I left him for a few runs to fully heal. Some of the dogs did step up to take his place, but it's like leaving an extension of you at home...things just aren't as comfortable if he's not in the team.

Maybe it's just Legolas or maybe it's my imagination (it's many long hours staring at a team of dogs, after all!), but I think sleddogs have a lot to teach us about team work.
Think about it:
The right seasoned veteran next to the wild youngster; patiently pushing him where he needs to go to avoid running into the tree or the calm, cool and collected Mambo next to the shy female, not getting perturbed when she gets tangled.
Due to a springtime squabble, Nibbs and Razz detest each other in the yard. But put them together on the line and they agree to disagree about who's more macho and become some great wheel dogs.
Kuchen wasn't pulling up the hills, but would be screaming to go whenever we stopped. Move him back to wheel, stop a few extra times (while he was pulling) and now he's happy, comfortable...keeping a tight line!
I also remember running and pedaling up Huckleberry pass. The dogs could've done it themselves, but we're a team and working together (even though I'm sure I wasn't that much help) got the job done...better than if the dogs or I had been alone.
Putting everything to the side in order to focus on the job at hand. Working hard together...it's what sleddogs are good at!
Posted by Josi at 12:00 PM No comments: