Something memorable about training in the fall of 2014 and even on the sled in 2015 was the amount of moose encounters. One sticks out in particular...although there were many more than I care to remember.
We had run and seen a cow and calf up in the mountains away from the river on the 4-wheeler before, but didn't think much of it the next week when I went out at night. I'd never seen a moose up there before and, since they tend to stay by the river, didn't really think we'd see one again. It's a pretty busy forest access road.
We were about 4 miles into the run when I looked up and saw something big and black. With the big ears, my first thought was wondering what in the world a mule was doing up there (we passed two ponies earlier - in their pasture). Then I realized it was a moose...the baby/yearling moose (which is quite big). A lot of thoughts went through my head, not the least of which was, "Where is momma?"
I stopped the dogs and hoped it would move off. But no, it stood there - with the dogs getting excited and starting to drag the 4-wheeler towards it. Did I mention I had added the puppies to this nights run? Of all nights to have the extra power...not!
It started swinging it's head and coming towards us. I put the 4-wheeler in reverse and called for the dogs to, "Come Haw" - but of course they didn't. It was rather slow motion to me, when it came nose to nose with the dogs. It stepped awkwardly through the first 6 dogs (which happened to be most of my best dogs) and then came running down the 16 dog string. I've heard the moose go after the light, so I clapped my hand over my headlamp and leaned to the side of the 4-wheeler. It came trotting up the other tire track of the road and blew past. I could've reached out and touched it.
The dogs did not try to turn and follow it - they had gotten quiet and submissive when it came through the team and then excited to keep going forward when it was past. So down the trail we went - my heart pounding and thanking God for the protection.
The only thing I can think of as a reason for the baby moose to come through the team is that "momma" was behind us - which makes me even more thankful that she didn't think to come join the fun. And in case you're wondering, we never saw them again - even on the way back home that night.
Posted by Josi at 6:48 AM No comments:

Fall training has begun! It feels so good to get behind a team of dogs after 12 weeks off... 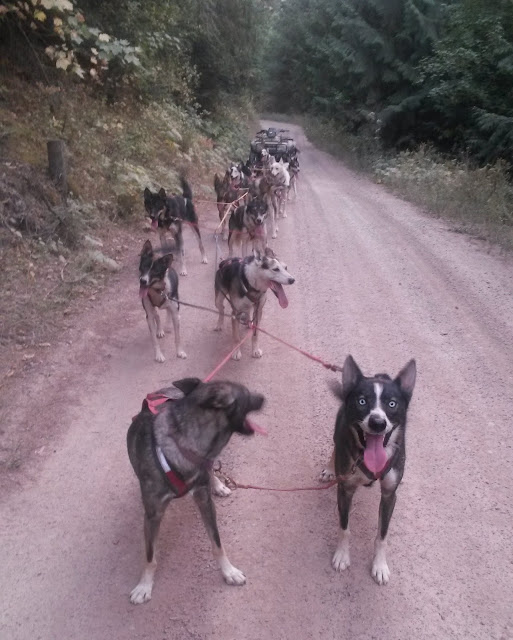 And here's lil' miss Moondrop: Summer's only pup. She's a perfect mix of Razz and Summer! 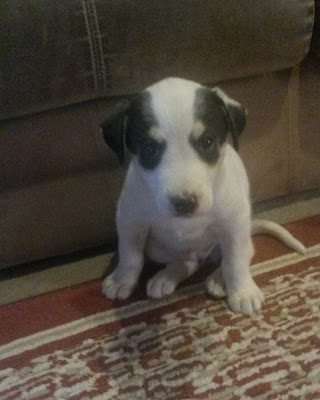 How it all started – Part 1 – How my adventure began…

So I’ve been thinking a lot about how I first got into sled dog racing…it’s hard to believe that I’ve been running sled dogs for over a decade! I figured it’s time to put everything on paper before I forget. Believe it or not, it all started in as a little girl praying for a horse.
I was a typical seven year old girl with dreams of having a horse. I basically played horses or pretended to be a horse constantly. I even prayed for one, although we lived in town. My dad once told me to stop praying for a horse because I was never going to get one…no, I’ve never had one but little did we know I would end up with a much more expensive hobby!
We moved to before I was ten and in light of the move (the second within a year), I wanted a friend and a dog I could handle myself. My childhood companion, a German Shepherd/Border Collie mix named Sable, was dog aggressive and not suited for a little girl – I couldn’t control her and was actually afraid to walk her if there was another dog nearby. Still, I loved Sable and you’ll find her in many childhood pictures with our family.
The most important job she had, as far as I was concerned as a little girl, was to guard me from the range cattle (many with long, sharp horns) which we biked through in the back country. With her and my dad around, I would swallow my fear and follow the family through the herd. Being the dog of my childhood also meant she spent time as my confidant for those childhood meltdowns. It makes me laugh now; but at the time she was a properly compassionate listener…and I now know that while dogs can’t understand all your words, they read your body language very well: they know when something is wrong and try to fix it in the only way they know how.
So we were living in the city in and I wanted a dog…my own dog.

Back as far as I can remember, I wanted a husky-type dog. Remember all the toddler picture books with pictures of animals? Well, my favorite was always the wolf or husky. When we moved to I began to want a real one for my own.
My mom, being a wise woman, told me to do my research and present my proposal to my dad in the hopes of gaining his approval. I did my research, with her help, and decided I wanted a Siberian Husky rather than a Malamute or any other breed. I then began to talk with AKC breeders. Sadly, some of them were less than friendly to a little girl who wanted to get her first dog. First lesson learned: don’t give up just because some folks aren’t encouraging.


At last I found a breeder with two 9 month old huskies. I wasn’t too concerned about the age; I really wanted to get a dog and couldn’t find any puppies that fall. We saw the parents, looked at pedigrees (nothing special there) and went home from the first visit without a dog. We went back with my dad and he agreed to buy me my first dog. I remember him asking me if I was sure I wanted the one I got – I nodded and said, “Yes, I’m sure.”
Posted by Josi at 6:00 AM No comments:

As many of you know, the 2014-2015 season was a very bad snow year for us. But it started out pretty well...great, in fact. Due to the cool summer temperatures, we only took 6 weeks off beginning in June, and the dogs had a great base by September. Harness broken and running with the big dogs were Achilles, Nestor and Odysseus - with Achilles being the super star. They turned a year old in November.
Because of trail closures, we are no longer able to run very far on the home trails - basically 6 miles is about all we can dog without doubling up trails and adding loops. I managed to squeeze in 10 miles by doing some roads twice, but it got a little dangerous going around the lollipop loops I made in the trees - once or twice we got quite stuck. Because we live on a mountain, it's also very steep and the Greek litter didn't do so hot on those - being young and not as strong as the older dogs.
Next, we moved to the closest train nearby which is 14 miles. This is a really nice trail because the first 2 miles are relatively flat, and then it goes more steeply up, and then down to the turn around. Then you come back over it all - with the nice flat ending to smooth out the end of the run. The only problem are the moose which are relatively friendly...and hard to spot in all the brush along the river.
About this time I purchased my first dog truck...at long last, no more trailer for the dogs! Unfortunately, the dog box had to be built, so for a time I had the trailer with the 4-wheeler and the dogs all in crates in the back of the truck. But it worked and, looking back on how I've hauled dogs over the years, it's a good experience for the dogs. They didn't care, so long as we ran!
One memorable incident, early in training, was that I had just gotten off the highway to go up river to our trail head when I felt something change on the trailer. I pulled over and realized I'd lost the 4-wheeler...my tie down strap had broken and it had rolled off the back. Thankfully, there was little traffic at 5 am and nothing was broken - it stayed on its wheels. But I've been paranoid about losing it since.
Later, the dog bowls I'd stored in the storage bag on the 4-wheeler blew out (I didn't realize it) and on the way back to run the next time I found them smashed on the road. Fortunately, the lightweight Kipmik bowls are semi-collapsible aluminum and worked just fine once I banged them back into the correct shape!
It was a very fun season to do exploring, because we were on the 4-wheeler for so long, but I don't like doing 30 mile runs on dirt. Even when there's snow on the ground, it's a long, cold grind for the dogs. But the exploring helped morale for us all - as long as it wasn't too icy, which made for a nervous ride for me!
The challenge of being on the dirt is the dogs feet. We racked up miles and some of the dogs, especially the hard driving dogs, got worn pads and toes. I bootied them all, but that meant going through a set or more per dog per run...lots of $$$. But it helped immensely, even if they were booted for just part of the run, and with good foot ointment and backing off on the mileage the dogs feet were in great shape again before the snow finally arrived on Christmas Eve (our first sled run).
Along with the exploring, I also began running at night to mix things up. The dogs loved it and it gave me the opportunity to try out some different headlamps and such. That's the outline of fall training in 2014, now some photos: 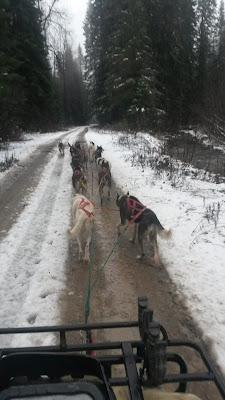 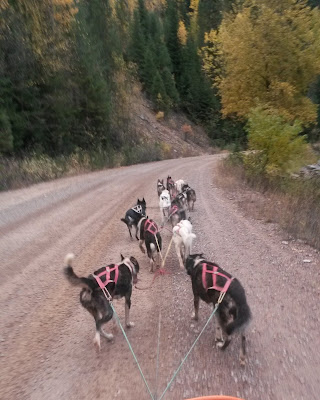 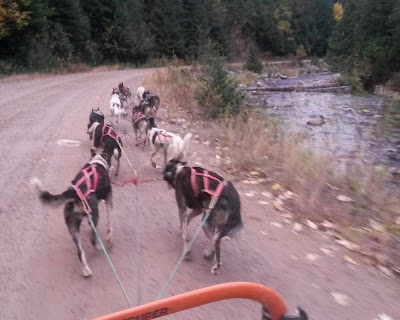 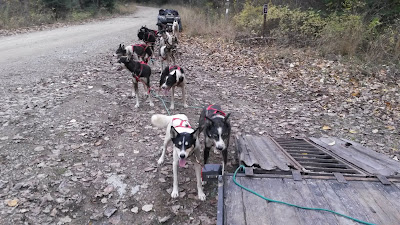 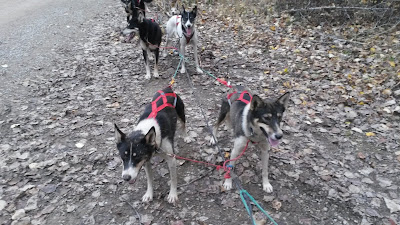 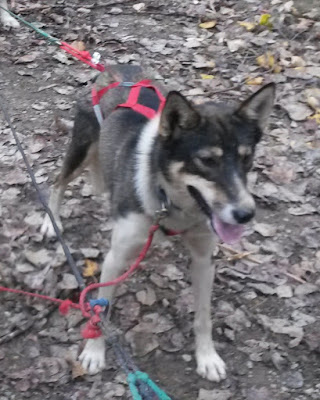 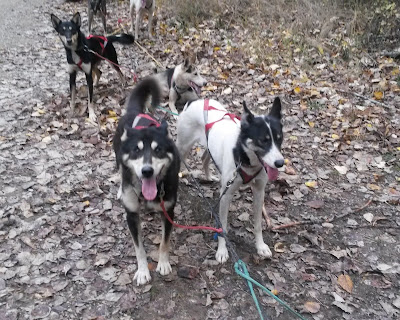 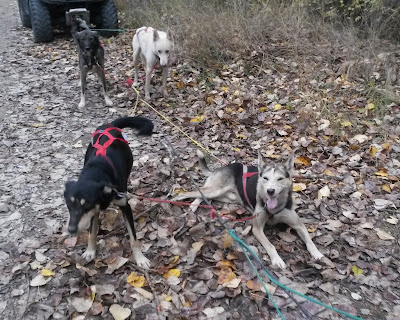 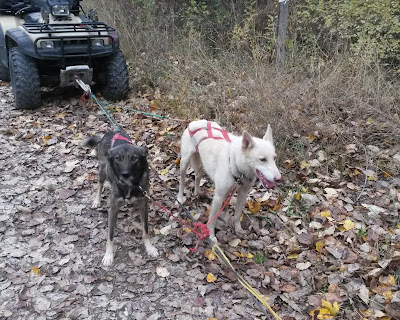 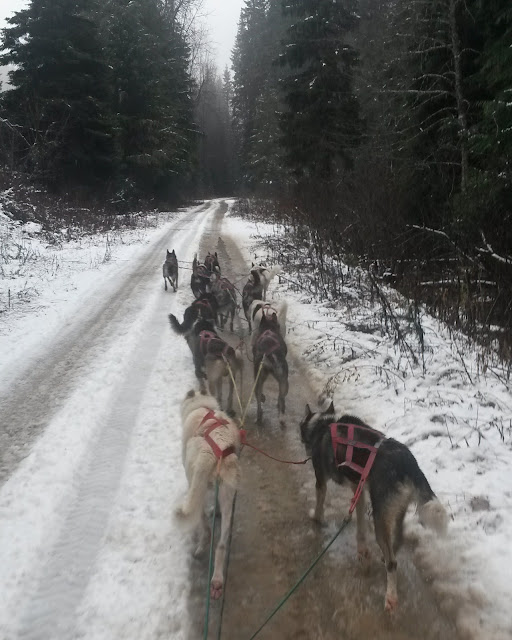 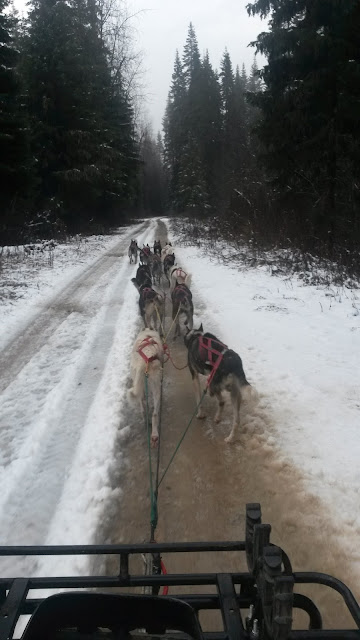 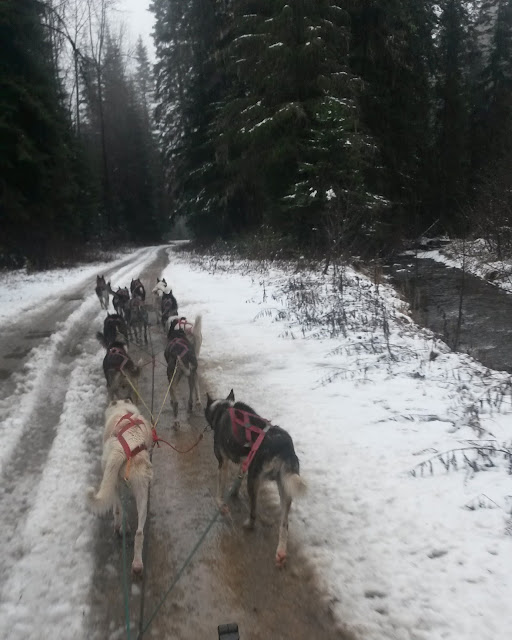