Has it really been nearly a year since I left for my Alaskan adventure? I know I've sadly neglected this blog, but with the season's return I'm back! For a couple posts I thought I'd try to chronicle my writing and life as well - but it's just too much to write (when I need to be working on my stories!); so I'll keep it to the dogs...at least for now.
In a whirlwind weekend, Hannah brought back three of the four dogs I'd purchased from Scott - Razz, Mambo and Nibbs. And the next week she came to take her eight dogs back. The kennel seems suddenly very small.
I'm still waiting for Mouse, who is coming bred to Pepperjack later this year and two dogs from my friend and mentor Lanette Kimbal - and then my kennel will be full.
At the end of August, I was given seven puppies by Brad VanMeter - a friend of Nancy Yoshida who got me in touch with Aaron Burmeister to handle last year and gave me Cougar, Rocky, Bessie and Bobby. At first I was against getting the pups, as my two planned litters for the summer did not take and I was getting Mouse bred, but then Nancy told me these pups are out of Bobby's sister...and I couldn't refuse! Bobby, sadly, died in the spring of 2011 and has been sorely missed - being a big, strong, fast wheel dog. The father of the litter is from Ryan Redington, a dog named Doctor, but I don't know much about him - yet felt it was worth the gamble because of the relation to Bobby.
I am so glad they are here and very grateful to Brad from meeting me in MT! They are growing fast and love to take walks with me. I've been trying to get them to follow the 4-wheeler, but usually I can only get 5 to follow at a time - the other's "get lost" and stay at the dog yard. 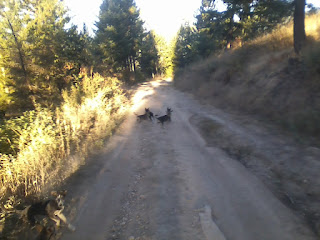 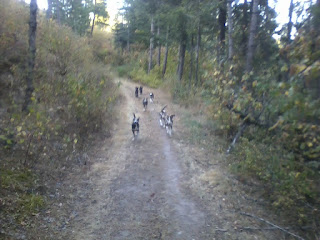 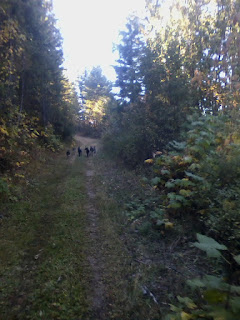 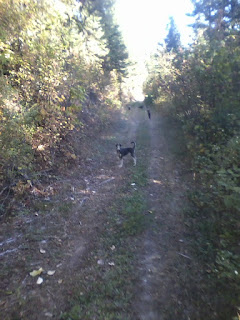 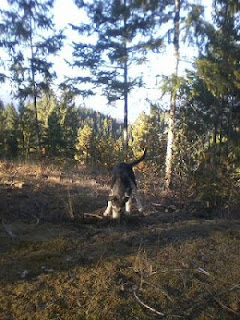 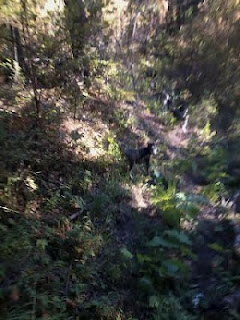 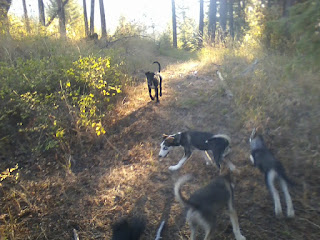 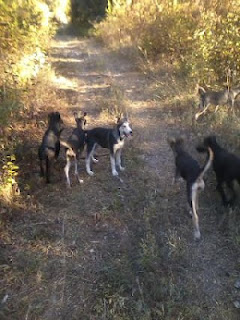 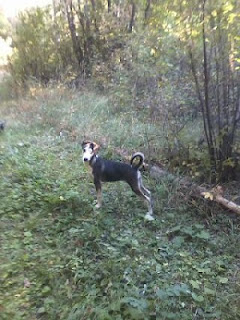 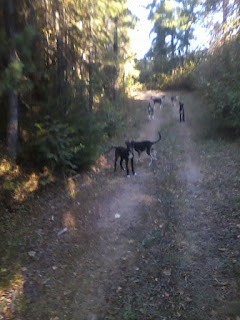 Biscotti - male
Of course, with the cool weather, I've been training. How different to be training here and looking forward to lower-48 races, compared to last year! It surprises me a little, but I'm actually missing Alaska a bit...
With that said, having Nibbs, Mambo and Razz here is like a dream. Knowing what they've done in Alaska, I just hope I can train them so they really shine down here in the mountains. They fit in perfectly with my dogs, matching strides, and are powerful dogs.
So, my team for this year (minus Mouse and the two from Lanette that are still to arrive): 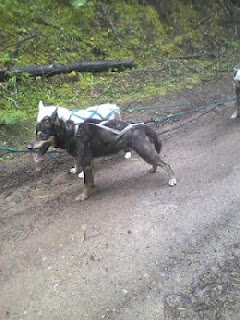 Griz - 8yr old Male from Laura Daugereau. He doesn't lead but is a nice, solid boy who run's anywhere else happily and get's along with anyone. 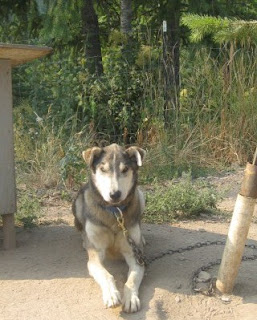 Cougar - 9yr old male from Nancy Yoshida (prior ran Iditarod with Aaron Burmeister). He is a good leader who can run anywhere. Nice trot and I'm sad to see him getting older - he's such a good boy! 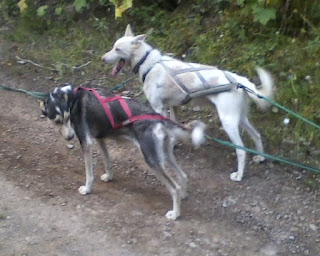 Jersey - is she really 6yrs old now? From Katie Davis. A cheerleader, who won't lead but keeps the leader's in line by running point. From there she'll make them take every turn - even when they don't want too! 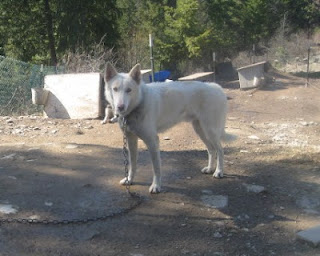 Legolas - 4yr old male leader from Doug Swingley's last Ricky litter (as far as I can tell). He's amazing and improves every year, maturing and getting more crazy to go. 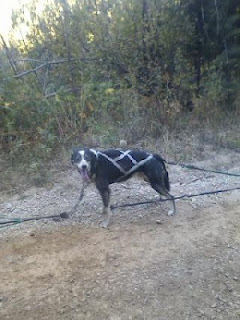 Mambo - 6yrs old male from Scott Smith. Has run the Iditarod and numerous long distance races. He's strong and steady, but doesn't get along with other dogs well. So glad to have him on board! 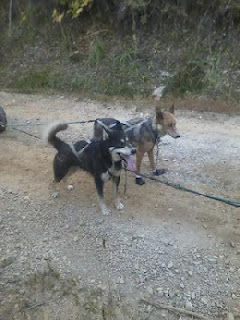 Nibbs - 6yr old male from Scott Smith. Like Mambo (his sworn enemy!) he has run the Iditarod and numerous long distance races. Like the lost boy he's named after (from Peter Pan), he's always happy. He was one of my buddies in Alaska and I'm so glad Scott was willing to sell him to me! 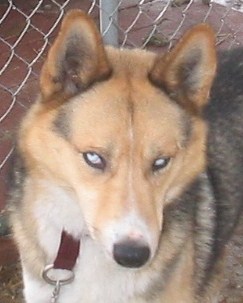 Quest - 9yr old male. Well, what can I say? He's been here from the very beginning and as long as he can run, he'll be on the team. Will he race? Who knows, he always surprises me! 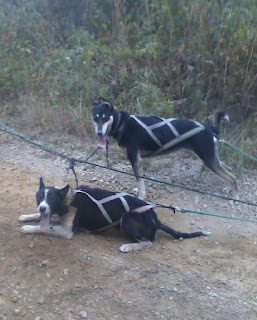 Razz - 2yr old male from Scott Smith. Given to me last winter, I'm so glad my boy is finally here! He's fast, sweet and well-behaved. Maybe he'll be leading this winter! 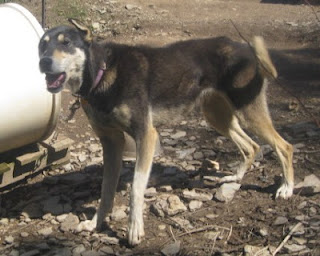 Summer - 3yr old female from Katie Davis. An amazing girl, she grows in confidence every year. Led a bit her yearling season, so I hope her and Legolas continue to be such a good pair. She's quickly picking up commands and I only see her getting better! 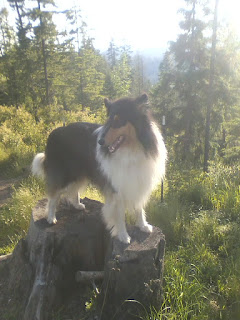 Handsome? Ok, well my pet Collie thinks he's a sleddog and I guess he deserves his place here! I first hooked him up as a joke but he loves running with the team. Racing? I doubt it! But he is the boss of the kennel - from overseeing the puppies to making sure the race team eats (if they don't, it's devoured by Handsome). You can never overlook him...﻿
Posted by Josi at 7:20 PM No comments: