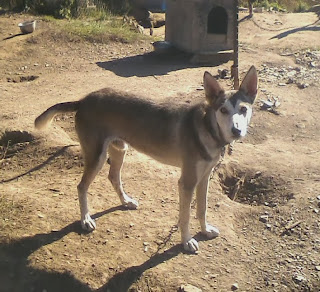 Kuchen - What can I say? He is the spitting (though smaller) image of his uncle, Bobby. One of the cheerleaders of the team, preferring Wheel and Team and never causing any trouble in the yard or even really caring for attention at all...I hope to see him fill out to a 50+ lb dog and keep up that beautiful trotting!
Posted by Josi at 9:12 AM 2 comments:

So we're sitting at almost 400 miles and have completed three 20-mile runs thus far. The yearlings are looking good - they have their moments of greatness...and then the not-so-great moments! There are times that I forget that they aren't veterans and I have to remind myself of how much they have to learn. I'm so thankful for the mentor who keeps me focused on the future - it's so easy to get caught up in the moment and forget that I'm molding a team for years to come.
With that said, last week we backed off and did three five mile runs...running with Mouse's pups in the main string! The pups fit in well, Peppermint is a little shy of the "big dogs" while Jingle came back with a new excitement and dedication to his job. Frost...is Frost - always the center of the attention!
Mouse's earliest due date for Mambo pups is the 9th. She insists on digging herself a bigger hole under her house in the puppy pen rather than using the house...but with the weather changing for cooler temperatures, maybe it'll be more snug. Since her last litter was Christmas/holiday/winter theme, I'm thinking of doing a Thanksgiving theme for the litter this time (Pilgrim, Squanto, etc.).
About the time I bred Mouse, Sweetwater managed to get bred to Biscotti - not a breeding I would've planned although it's not the worst match in the kennel. I kept her running but it now appears that she may, indeed, have some pups...they would be due in about a week. The worst part about it is that I'd lose her for the season - and I wanted to see her and Belle side by side this year.

Besides the kennel news, I've been thinking a lot about gaits this year as I run my team. One of my desires is to build a kennel of uniform dogs that trot effortlessly...and a lot of my dogs pace! In Alaska I learned that as long as they move comfortably (and pull, of course!) it's not a big deal...but it bothers me immensly.
I remember several years ago when I got Jersey and Summer from Katie Davis that she told me to learn each dog's gait, because a shift in gait will tell you a lot about the dog's condition. Of my veterans Summer, Legolas and Mambo all pace until we get to the sled (which is another thing I learned - dogs move differently on the snow). I can handle that, but I think pacing dogs look terribly uncomfortable. I worry about the yearlings, two of whom pace and all of whom are still learning to pull straight and it will be interesting to see which ones become trotting machines on the sled.
None of this can be resolved until we get to some longer runs on the sled, so instead I look at the team and smile as I see them moving down the trail at 7-8mph, however they do it. I remember when I ran siberians and it was "all out" downhills and crawling uphills. I would never have imagined that a team could be under control (ok, ok, I probably shouldn't say that - it's more likely just that the team lets me think they're under control!) and keep that steady, forward motion for so long. And that, regardless of whether they trot or pace, is an amazing thing. 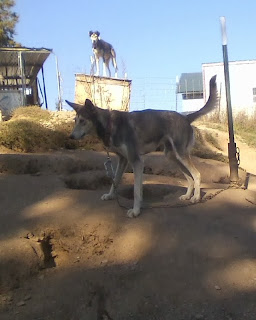 Brownie - my littlest brother saw a dog named "Brownie" in a Mushing Magazine article and, when the pups came from N. Dakota told me that I got "Brownie"! And so, the rest of the litter had to get sweet names because of this sweet girl. Pudding may be heavier, but Brownie is more leggy. At the vet she weighed 38 pounds, the smallest on the team, but she's a hard worker in the back of the team. She started the season trotting beautifully, a lot like Summer, but now she thinks she needs to pace. I look forward to watching her mature...maybe later this year we'll put her up front.