One of the best parts of mushing is getting to watch your team develop and see your puppies fill the team. This year I'll have ten of my own puppies in the team and I'm excited and a bit nervous to see how they do - will they be as good or better than the retiring dogs? The only way to find out is to give them a chance...Frost, Peppermint and Jingle didn't let me down in 2015, so I hope the younger pups follow in their footsteps. I feel like I'm getting some good consistency as far as the dog's confirmation, but in dog sledding it's all about how they do in harness.
In case you're not familiar with them all, here's "the fantastic ten" young dogs that have been born and raised here at There and Back Again: 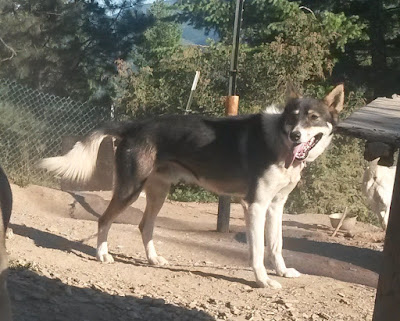 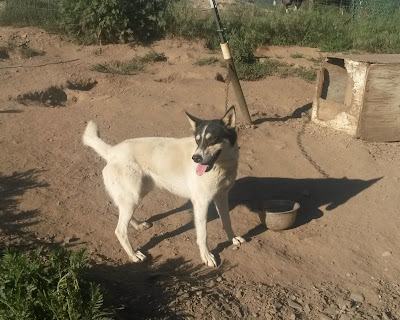 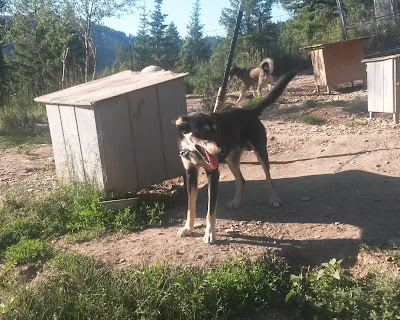 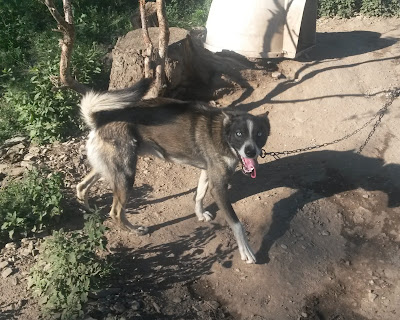 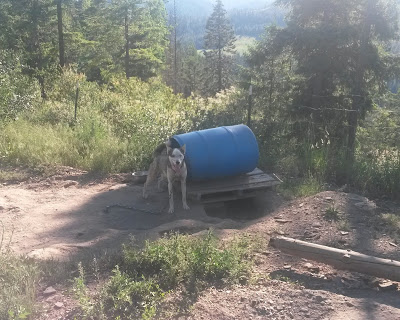 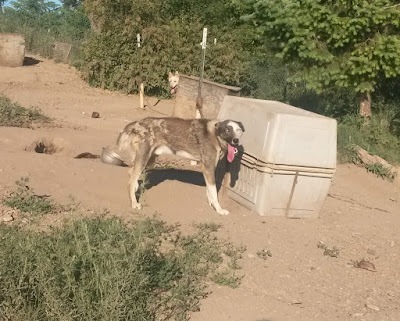 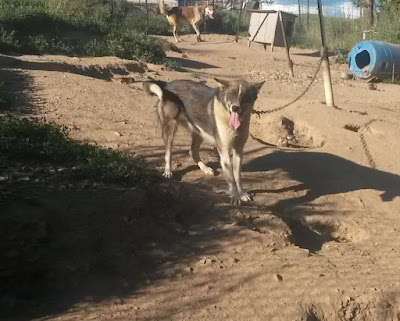 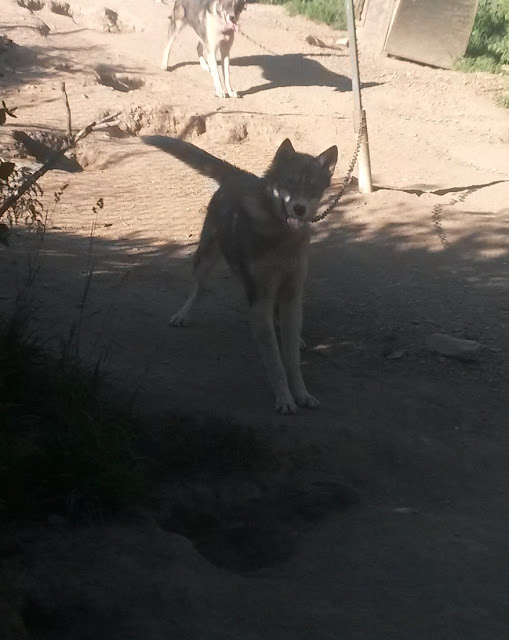 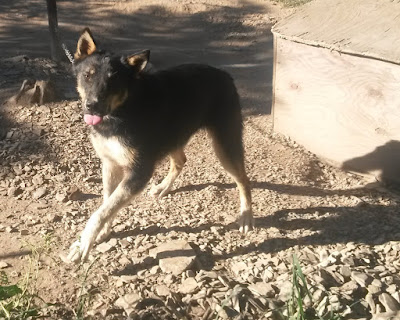 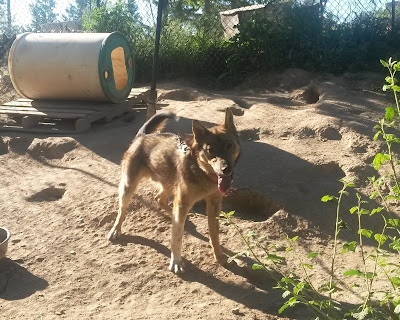 Before we go back to 2014, this month looks like it will be a busy one at the kennel. As several dogs get older and with the small litter sizes for the Mouse and Rowdy pups from 2013/2014, I took the plunge and bred three litters of my own, and will be splitting a litter with my good friend and fellow musher, Hannah. Here's what's planned... 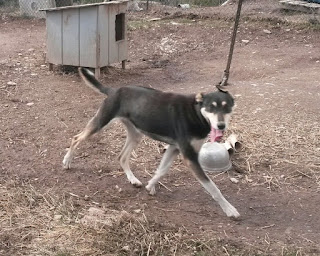 Summer has been on my team since I got her as a yearling and is the largest dog in the kennel at 60lbs. She is a power house and I've never reached her limit. 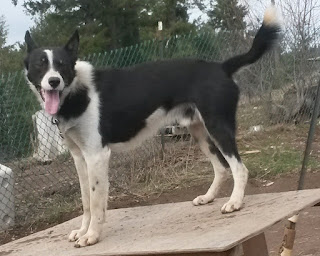 Razz was a yearling when I was in Alaska and I fell in love with him there. He's smooth and graceful; I wish I had a team just like him! 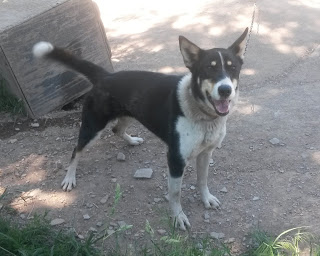 Rowdy was a yearling when I was in Alaska and has never lost her enthusiasm. She's becoming a more reliable leader and, like Razz, is amazing! 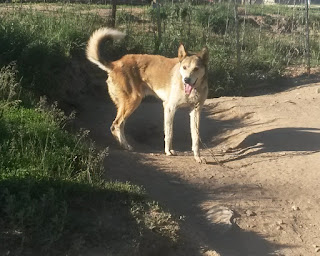 I've admired Tobasco and his offspring at Hannah's place for a while now, but just wasn't sure who to breed him to. He is large, 60lbs + but as graceful as Razz. Very excited to see some of his red pups in the team! 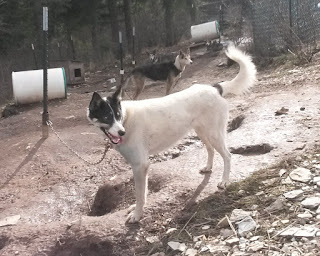 Bella was a dog I harness broke in Alaska. She's a big girl and gets better each year - actually leading a bit this year. She's still young, so I look forward to watching her mature...those Mouse pups are always good.

So after the races, we lost our snow by mid March (as usual) but not before I was able to get some 15 mile runs on the Mouse X Pepperjack puppies. They were good, no chewing and relatively easy to harness. I'm amazed how much the pups pick up from running with the adults. It always seems like they come back from a run with "the big dogs" and are so much more confident.
I'm at the point where I really don't need to buy dogs, and had made a rule against it, but after the Iditarod Scott offered me Rowdy - Razz's sister - bred to Clyde (his best male after Pepperjack). I took some time to think about it, but at last decided to go for it. She's just so good! She completed the Iditarod with Rick Casillo and there's nothing to complain about with her (unless you don't like getting jumped on - she has this thing about being overly friendly...). 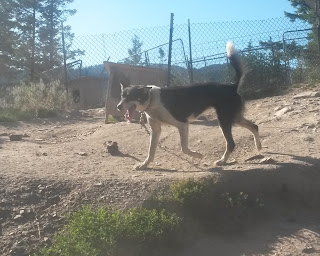 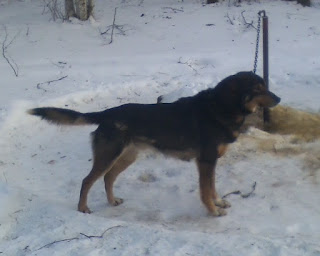 I must confess, I was nearly in tears when I picked her up. It was a good reunion (and the people at Spokane's Alaska Air Cargo are the best!) and she was, I think, very happy to see someone she knew. She settled in quickly; Rowdy isn't a dog to search for fights. Then it was just waiting for the July puppies, which came right on time: 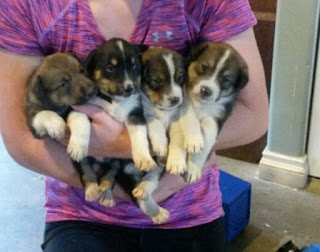 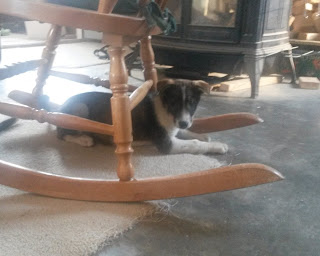 Bee - the only female 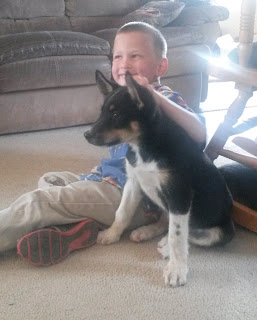 Owl and a young friend 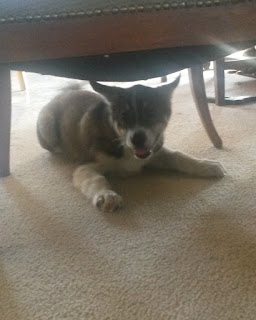 Eagle - having fun under a chair

This litter rivaled the 2012 Mouse X Pepperjack litter in terms of niceness - no escape stories (like  the Mouse X Mambo and Sweetwater puppies!) and supper social. They are by far the biggest - a full harness size bigger than the other pups I've harness broken, despite being only 7 months (I prefer 8 months old) when I harness broke them. And, of course, I was thrilled to get a girl - Bee (or Princess Bea - depending on the day) is just like her mom and all of them have great confirmation. 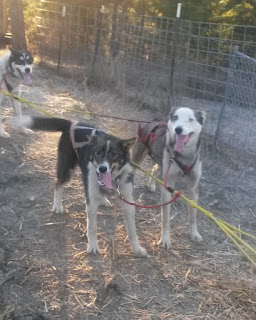 Bee and Nestor (white face - out of Mouse X Mambo) 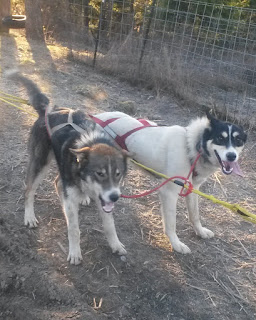 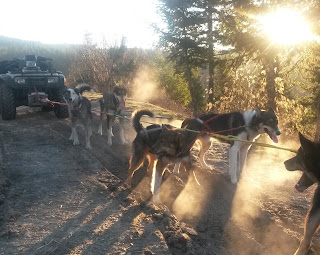 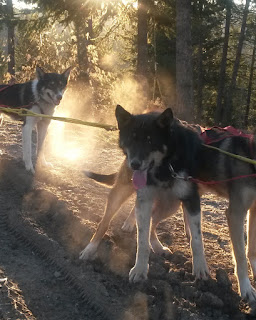 Owl - so serious at such a young age! 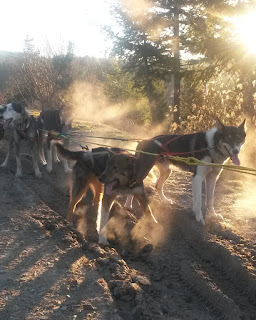 All in all, 2014 was a good summer - lots of dreaming as I watched Rowdy's puppies grow and realized the Mouse X Pepperjack puppies would be good additions to the race team. The weather was cool enough that I could keep running dogs except for a few weeks in June.