How It All Started - Part 3: First Season

The best part is that the Sepp-Lok sled dog kennel was located in the same town – albeit in the country. My first job was working there and MJ and Curt even went out of their way to take me on a dog sled ride that spring - before the snow was entirely gone. I would work for them through the following summer and when we moved out to the country I was able to do a lot of training with them because we lived out where they trained.
That first winter I remember getting really, really cold during the rainy fall training runs and being very frightened of the crazy puppies – the “G” litter – because they could drag the 4-wheeler. I also remember double sledding with MJ quite a bit and loving every moment behind the dogs!
I was invited to handle for their two 6-dog teams at the 2006 Conconully Snow Dog Super Mush and it was a great opportunity to meet nearby musher’s. It was also my first taste of sled dog racing as more than just a bystander. I helped drop dogs, harness, bring the team to the start and help at the finish. The great thing about Conconully is that it was so well run by the organizer, Elaine, and the volunteers that it became a standard by which many mushers would compare races. While there, I also got to go on a sled dog ride with my friend Vicky's malamute team – which was probably the highlight of the trip! I don't think there is another 6-dog team I raced against while doing mid-distance that had a happier face or curlier tales - I can still see the happy team in my minds eye, trudging up the hills.
While there, I also met a lady named Amy who was getting into Seppala’s and had a Siberian mix named Cruiser who was too slow for her team. She offered him to me.
I think I forgot to mention that my mom came with me. I don't remember it being to hard to get her to agree to let me take him home…as a trial, of course, because Daddy didn’t know yet! Cruiser was the standard husky - black and white with striking blue eyes.
Let’s just say that I was thrilled to bring him home, but also nervous about what my dad would say. He just asked, “How much did you pay for him?” Since he’d been given to me...that was that! (This also marked the official downhill trend for being sled dog crazy – once you have two dogs, what’s three, then four, then twenty, right?!!!)

So I now had Nakota and Cruiser to run, but the Jr race at Priest Lake was a 3-dog race. Curt had an older, half-blind (blind in one eye) Seppala named Trapper who was a leader. I remember being very nervous about the race – it was 3 miles and I’d be on my own and what if I had to pass another team? Or the dogs didn’t take the turns?
It went without flaw, Cruiser and Trapper leading little Nakota in wheel, and I think I might’ve won – but it’s been long enough I don’t remember. But it just confirmed my wish to have my own team and race mid-distance. At this point my hope was to get enough dogs to run the 4-dog spring races for next season. Since February is virtually the end of the race season in , I began planning to obtain more dogs.
Curt agreed to let me work of Ella and Amy sold me Quest that spring. There are so many memories of Quest! I consider him my first real sled dog and although he died several years ago, I still miss his howl in the kennel. He was a gorgeous red dog with striking blue eyes and an excellent Seppala pedigree. He had been super shy, which is why the lady was selling him, but he came out of his house the first night and ate just fine. I found him the model of reserve and dignity - he liked people, so long as he could remain his refined self! After all, he wasn't just a sled dog - he was a Seppala Siberian Sled Dog!
Quest also led me down a specific “purebred Siberian Husky” path – because he was my first Seppala sled dog who was not AKC registered. Up till Quest, I’d only worked with AKC Seppala’s and there’d been a lot of controversy over bloodlines and registry. But I’ll get into that a bit later…
Posted by Josi at 5:35 PM No comments:

Training is underway, after weeks of iffy weather. Juggling work and training, I usually run weekends and twice during the week. In September, because of the high temperatures, I had ended up running only weekends but also got in some evening nights - so I'd run 3 short runs in a weekend - but we are still "behind" compared to last year. I'm not worried, though, because last year we ran through the summer so the dogs kept in shape. This year we're starting after several months off - every year is different when you're running sled dogs!
We've bumped up to 14 miles now, and everyone is looking good. The yearlings are a blast to work with - they are a talented bunch and I look forward to seeing them mature over the season.

I have to confess I've neglected this blog a bit because over September/early October I did some real soul searching about my mushing future. Originally it appeared that to continue pursuing sled dogs I needed to take a break and go back to school - there's just not enough hours in the day to work full-time, run dogs and study. However, God opened some doors and I get to keep the dogs! School may take a long time, but I'll be happier and even if I don't do much racing, I can bide my time to pursue the Iditarod in the long run. More to come on this...but for now, back to training!

With the shift in priorities, I did make the tough decision to downsize. It's especially hard to see some of the puppies born here move on to new places, but I enjoy hearing about their new adventures!

Bella is one of those dogs you wonder about. She pulls hard and is generally well behaved, but not a great leader and, I'm sorry to say it, not the brightest dog of the team. Since the best way to train a leader is to put them in lead, I decided to let her and Achilles lead together so they could learn together. About a quarter mile into the run (which began in semi-darkness), I saw moose eyes to the left. They moved ahead of us and onto the road where the cow and calf decided to stop. Grr! They would not budge and I stopped a safe distance away, but the cow was still a bit menacing (at least, I thought so - I had all kinds of nightmarish visions in my head, borne of last year's moose encounters). But how to turn around a 19 dog team that was fresh and banging their harnesses? Without much trust in my command, I said, "Come Haw!"

And Bella took the command and dragged Achilles and the team back towards the truck!

Now, I've discovered that the moose generally move out of the way if you give them space, so about a tenth of a mile away, I stopped and turned back again. The moose were still in the trail, so I had to stop again at the same spot. Unfortunately, Bella had the bright idea that we wanted to turn around again. Ten minutes and many tangles later, we got moving forward again (I ended up having to move Bella out of lead to get moving forward because she's a big dog and did NOT want to go towards the moose - who were well away from the trail now).

Another night run, we came down to the end of the trail (where we turn around) and there's a campground. The dogs got stoked because with the lights and smells they thought it was a checkpoint. Cool thing is that on a later run we went through the campground and over a one-lane wooden bridge. What great training for the dogs!

This week I ran on Wednesday night and Thursday morning - spending the sunset and sunrise in the mountains. It's hard to catch in a picture, but I tried. Seeing the beautiful colors reminds me that none of this came about by chance - there is a Creator; it couldn't have happened by chance... 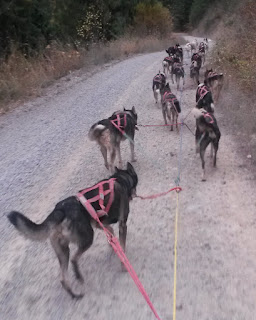 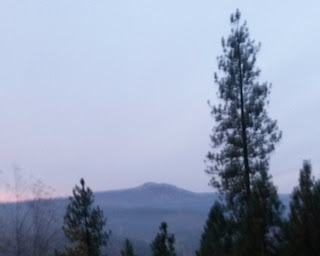 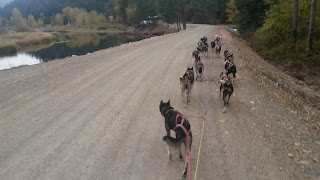 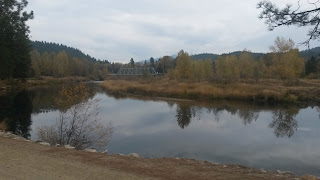 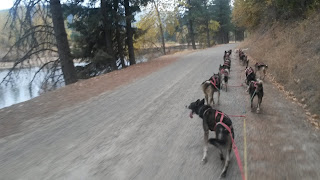 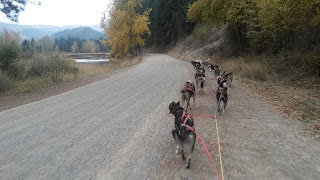 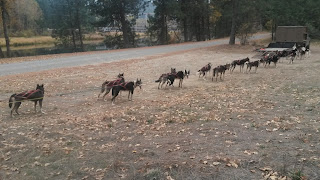 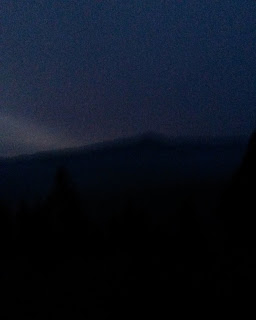 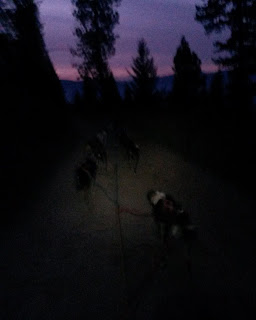 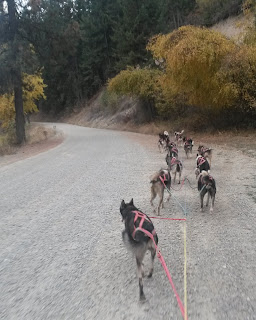 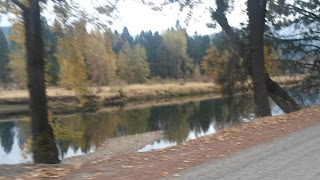