We've covered moose, but before we finish up with the wildlife, I should talk about the wolves...
First of all, I'm very disappointed with the reintroduction of the Canadian Gray Wolf because we already had native wolves in my area and the Canadian wolves don't belong here...our local wolves have been killed out now and the intruders have ravished our elk and moose populations. I could go on, but I'll just say that I miss the trails five years ago, when the woods had more elk, deer, moose and bobcats...
That being said, wolves are still amazing creatures - I just wish they were left in the correct habitat; like Alaska!
I watch tracks constantly - trying to see where the animals are moving. It's rather disconcerting to come upon fresh wolf tracks that are the size of your hand...makes you wonder what they would do to the dog team if we met.
But they never bothered us; although there were times I had serious concerns about meeting a pack. However, one incident made me very upset. Anyone who knows dogs, knows that when they get bored they make trouble - chewing, fighting, etc. It's the same with wolves. When they're not in their correct habitat, they have too much time and they kill for fun (exactly like when a sled dog gets out and kills all the chickens, but never eats one...). People will dispute this, but I'd like to know how many of those who would dispute it spend a significant amount of time in the woods...because the fact is that back in the woods up the river there is a moose carcass that the wolves chased over the cliff and left without touching anything except guts. And here's the proof from my phone camera: 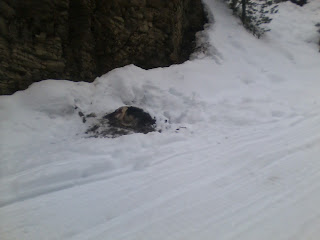 But to get back to the important things...sled dogs!
On this same trail, I discovered some goregeous loops. One I took, planning on a seventy mile run, I only made forty miles because we ended up breaking trail and I was afraid we'd gotten lost because the forest service trail markers weren't very good. But we also discovered a fun, thirty mile loop I started using - and plan to use more in the future - which I find refreshing and dynamic because you start at the river, inbetween mountains which are pretty narrow and shady (nice and cool for the dogs) and you climb out onto the mountains for this view: 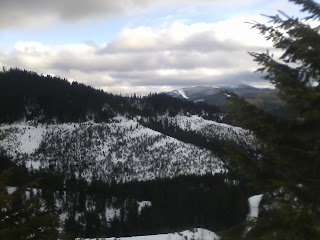 The tall mountains in the far back are Silver Mt ski resort! 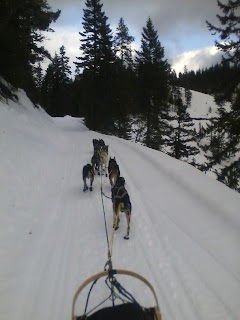 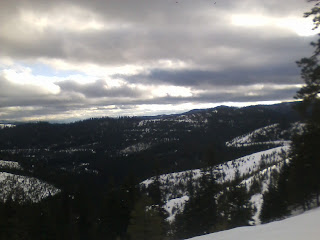 The faint hazy mountains are what we see from our house!
So the end of this post is that, despite the imperfect wildlife management, I'm so thankful to have the health and ability to travel into the wilderness. It makes me realize how amazing creation is and how unique every day is - because you always find something new to appreciate and be thankful for.﻿
Posted by Josi at 12:03 PM No comments:

I'ts been so long since I've posted, I'm afraid I'm out of practice a little...and very behind in the kennel news!
Spring time just isn't the same without babies! I'm much behind on introducing the six bundles of fur that joined the team on 12-31-12...the winter holiday litter. 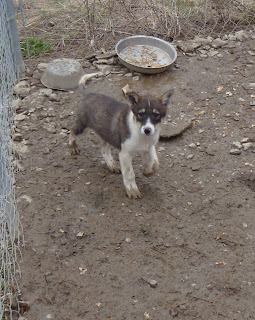 Frost - Is a goregeous boy and he knows it. A bit of a bully because he's the biggest - but I think the's going to be sweet like his momma! 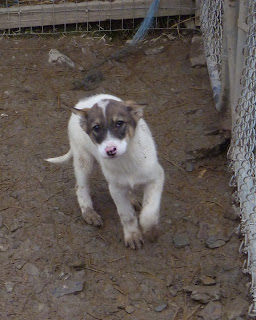 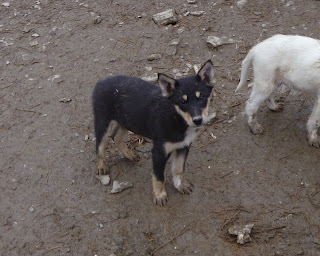 Jingle - one of the two little boys. He eats and eats and reminds me of his older sister, Midge, from Alaska (see previous posts on Scott's dogs)
﻿ 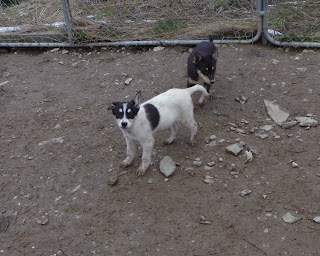 Peppermint - named after his daddy, Pepperjack (see previous posts for more on Mouse and Pepperjack). His face reminds me of 'Pepper' and I hope he turns out just as great a sled dog! 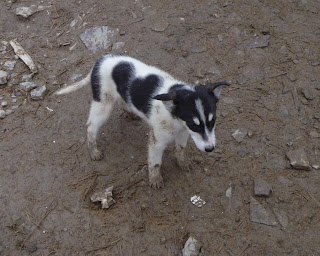 Solstice - is just a little guy. He's had some balance problems, so the chiropractor had to do an adjustment on him and now he's doing better. He doesn't like being left behind and holds his own at the food bowl.
The Girl 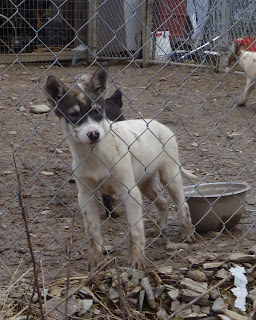 Being the only girl, Star gets two pictures. She is a show-off and momma's girl - following Mouse around and taking her cues from the adults. But don't let her fool you; she's up for a tumble with the best of them...and she is faster than her brothers on walks! 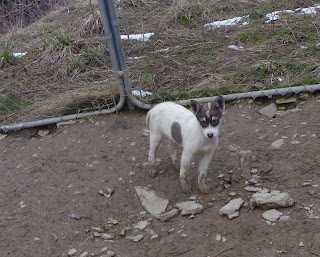 Wow! Has it really been so long since my last post? I confess that I've been putting it off...I'm going through serious post-season withdrawal and knew writing about the good times would make me restless when I couldn't be running! But today I ran our first spring run on the 4-wheeler and decided I'd better get the stories written down while everything is fresh in my mind.

Throughout the season, we logged over 2,000 miles - my nine dogs and I. Nothing went quite as planned or expected (but, hey, that's mushing!) and we were able to complete both races we started - which means we just need one more Iditarod qualifier!
I've been thrilled to watch Scott's training philosophy work and we'll be training the same way again next year. Dogs I've run for a few years grew leaps and bounds; Legolas in particular who led all but 2 miles of the 500 miles of racing we did this year - 50 miles in single lead.
The more I run dogs, the more I enjoy it and realize I could never go back to sprint racing...there's something particularly awe-inspiring about watching your dogs work. You realize you're the weak link and if anything goes wrong; it's your fault.

The highlight of the season, in my mind, was a mile from the finish of the Race to the Sky. It was afternoon, snowing softly and the Peter Pan soundtrack was playing on my MP3 player. Mambo was in the sled and I'd put Razz (the youngest on the team) up with Legolas. They had just climbed a seven-mile pass without stopping - through drifts and wind with the extra weight of my biggest dog in the bag - and then down the other side. When I stopped at the top of the pass, they were jumping to go!
Nearing civilization, we crossed the road into a field of drifted trail. The markers weren't good and I wasn't quite sure where to go; but saw a lone marker and directed the dogs towards it.
They lost the trail and floundered until they found it again, as I called them 'Gee' and 'Haw' - intent on finding the trail they snaked across the field in perfect order until we were back on track. It brought tears to my eyes - seeing them so comfortable and trusting when they were tired and the trail had been changed from the outbound route. It might seem a silly story, because I can't adequately explain the bond between a musher and team, but the moment will remain in my memory forever...
Posted by Josi at 11:00 AM No comments: